The first series of Mad Men has sadly come to an end here in the UK, but this does mean I can now talk about it without fear of spoilerage. Not that spoilers could really have ruined a show as perfectly lackadaisical and unaffected as this was. It may be the best television show I've ever seen (I say maybe). And, finally, I can air perhaps my greatest grievance about this show: I just can't figure this man out. 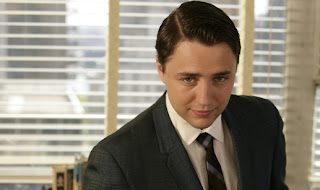 In case you, for some absurd reason that must be rectified post-haste, didn't see Mad Men, that's Pete Campbell (Vincent Kartheiser), a junior account manager at the advertising agency Mad Men revolves around, and he is both a complete bastard and an alarmingly charming man. He tried to blackmail his way to the top, treated both his wife and a secretary Peggy (Elisabeth Moss) with misogynistic contempt, and yet I remain unconvinced as to whether we're even supposed to see him as the bad guy. Although, really, Mad Men is that type of series that doesn't really have a bad guy, because what it has instead is a bunch of characters who are all, really, both bad and good, morality in flux; what with our lead character (John Hamm's bewitching Don Draper) being an advertising genius yet bedding two women who aren't his wife and secretly hearing his own wife's psychiatric sessions, and confident secretary Joan (Christina Hendricks) revelling in her bold sexuality, these are all people who come from fascinating positions in society and make different choices for different reasons. It's been said that not much happens in Mad Men; but the only truth to that statement is that things don't happen very loudly, because Mad Men is full of political confusion, sexual repression, moral ambiguity and all that stuff that makes today's best television so damn good.

So, yeah. If you haven't seen it, you better get on that. And I'll get on actually wrapping up 2007 and trying to kick this blog back into life again.
Posted by Dave at 1:08 am No comments:

J.D. tagged me, and who am I to say no when he says I'm one of his best friends? Flattery will get you everywhere.

1. Pick up the nearest book.
2. Open to page 123.
3. Locate the fifth sentence.
4. Post the next three sentences on your blog and in so doing...
5. Tag five people, and acknowledge who tagged me.

Well, sir, I am currently (and unfortunately, but we won't go into that) at university and thus have in various parts of this desk-thingmagig (that doesn't have enough room for a chair in its anorexic centre) all the books I had to read from this year's modules. Sadly, that's all, because I don't have the time to read anything I actually want to read, and they're waiting elsewhere for me to ignore this summer when my brain won't be able to take in another printed word without a warning siren going off. Not that all these books are bad, and, in the spirit of Italo Calvino, I'm going to pass over the Books-I-Haven't-Finished (*ignores 'Orlando'*) and the Books-I-Could-Give-A-Crap-About (*throws aside 'The Scarlet Letter'*) and the Books-I-Just-Plain-Hated (*rips apart Walt Whitman*) and pick up one that I absolutely loved. It's the magnum opus of George Eliot, Middlemarch. 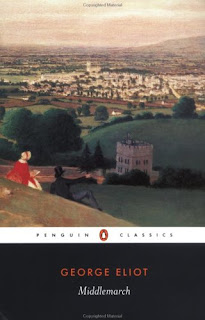 But results which depend on human conscience and intelligence work slowly, and now at the end of 1829, most medical practice was still strutting or shambling along the old paths, and there was still scientific work to be done which might have seemed to be a direct sequence of Bichart's. This great seer did not go beyond the consideration of the tissues as ultimate facts in the living organism, marking the limit of anatomical analysis; but it was open to another mind to say, have not these structures some common basis from which they have all started, as your sarsnet, gauze, net, satin and velvet from the raw cocoon? Here would be another light, as of oxy-hydrogen, showing the very grain of things, and revising all former explanations.

I can almost see you readers nodding off. That's hardly representative of why this book's great. This particular passage- not very far through this 688 page book at all- concerns one of the novel's two main characters, the doctor Tertius Lydgate, and some kind of medical ponderation.

How about something more filmic? This is from what my lecturers sold as one of the essential books we'd need; and fittingly enough, I haven't used it once. This is Film Art, by David Bordwell and Kristen Thompson:

Many critics suggest that the 1970s subgenre of family horror films, such as The Exorcist and Poltergeist, reflect social concerns about the breakup of American families. Others suggest that the genre's questioning of normality and traditional categories is in tune with both the post-Vietnam and post-Cold War eras: Viewers may be uncertain of their fundamental beliefs about the world and their place in it. The continuing popularity of the teenage-orientated slasher series during the 1980s and 1990s might cater to young people's fascination with and simultaneous anxieties about sexuality and violence- enhanced by sophisticated special-effects capable of creating gory and grotesque scenes.

I love television almost as much- or maybe just as much- as I love the movies. And when you've a lot of work and are having some kind of pre-twenties life crisis like I am, watching television is just so much more convenient that watching films, because it's just there, and it's just shorter.

But that's not what this post is about. The tv-movie is a derided being, generally dismissed as a movie-gone-bad, a film demoted to the smaller screen. But, at least in Britain, cultural seems to be engendered an environment where quality film-length productions are made with the primary intent of seeing them on tv, whether they be relaxing costume dramas or difficult dramas about social issues.

We aren't very far into the filmic year yet, especially in this blog's delayed world of US release dates, but still, it seems that much of the quality I've found so far this year has been in the realm of the smaller screen. Within the past month or so, I've come across four television pieces, three of which can already count themselves as some of the best things 2008 has had to offer.

Poppy Shakespeare is the odd-one-out here, the one that comes puffing in last behind all the other long-legged, super-fit competitors, but there's still some superb stuff to value in it, not least the performances of two of Britain's brightest young actresses. Anna Maxwell Martin, she of the BBC's superb mini-series adaptation of Bleak House, in simply "N", so named for the chair she occupies in the circular meeting room of the ground floor of a mental hospital- the only floor where the patients can come and go. She's been there all her life, and is insistent on staying, so comfortable is she. Poppy, meanwhile- played by Naomie Harris- wants nothing more than to get out, violently insistent that there's no reason for her to be there. Poppy Shakespeare is a bit too obvious in its see-sawing trajectory, and a bit too blunt to really put any kind of cut into the country's health systems, but the power it does accumulate is thanks entirely to the two leads, especially Harris, whose vibrant, caustic desperation gives crumbling way to a horrifyingly fragile woman. (But those purple credits aren't helping anyone.)

The No. 1 Ladies' Detective Agency is a beast of a different colour, now famous mainly for the fact that it is, tragically, the final film of its director, Anthony Minghella (RIP). It's also notable for being the first production to be filmed in Botswana; and for starring American singer Jill Scott. And for being the pilot for a planned tv series. And for being the long-awaited adaptation of Alexander McCall Smith's acclaimed novel series. Now that's a lot of reasons for seeing one movie. The whole thing could possibly be a little bit lightweight, even as it skirts dark social issues like child murder, but its charmingly so, and presents a blissfully different picture of an African country than you're used to seeing from all those adverts. Scott is indeed fantastic- warm, knowing and sharp- but so too is Dreamgirls' Anika Noni Rose as her prim, uptight, socially-shy assistant. Minghella bounces around various cases at once, crossing lines and showing how Mma Ramotswe (Scott) takes a unique approach to solving other peoples' problems. This is never going to be a masterpiece, but its charm, wit and general goodwill make it a delightful experience.

Another supreme female performance comes in the form of Olivia Williams' Jane Austen in the achingly beautiful (yes, I've gone into rhapsodic territory...) Miss Austen Regrets, which uses hand-helm camera and willowly cinematography to superb effect, reflecting the ever-present wilfulness of Austen, even at the prim old-age of forty (good god!). Jane's past it, see, and now the celebrated novelist is giving advice to her niece Fanny (28 Weeks Later's Imogen Poots, looking a damn sight older and performing a damn sight better)- but the everlasting irony is, natch, that while Jane might write all these insightful books about love, she's never really experienced it herself! But, really, Miss Austen Regrets captures that self-evident irony with painful precision, taking Jane around between her unmarried sister (Greta Scacchi) and disappointed mother (Phyllida Law) at one house to encounters with a former prospect (Hugh Bonneville). This is, really, the flip-side of Becoming Jane, dismissing the love story of that film with a flippant aside and showing us the social sacrifices Jane made for artistic immortality.

And now, finally, we reach the pinnacle. I had missed Boy A on its first (and second, apparently) showings- you do, really, need to be in the right frame of mind for a drama about a reformed child murderer (that's child on both sides)- but after actor Andrew Garfield won the television BAFTA for Best Actor a few weeks ago, I couldn't pass-up the inevitable third showing. Little did I know how good it truly was. Challenging but never preachy, Boy A weaves flashbacks of the central character's doomed friendship with another troubled young boy in with "Jack Burridge"'s return to society after fourteen years in prison. Only twenty-four, we follow Jack through all the normal happenings of a person that age- work, drinking, romance- but all are laced with danger, the horrible knowledge that the world could crack around his feet, and the pain of having to lie to the new friends he meets. There are no easy answers, just superb film-making and acting- scenes like Jack's drug-infused dancing, a rooftop confrontation and his hobbling along a train-line are indelibly etched, and its all bound impeccably, painfully together by Garfield's superb, poignant, disconcertingly familiar performance.

For U.S. readers interested in seeing any of these:
The No. 1 Ladies Detective Agency should be showing on HBO early next year, introducing the full series to follow directly after.
Miss Austen Regrets showed on Masterpiece Theatre earlier this year, and is now available on DVD with the mini-series Sense and Sensibility (also a good watch).
Boy A is, according to IMDb, currently scheduled for a limited theatrical release on July 23rd.
Posted by Dave at 10:53 pm No comments: