I Wanted To Go To The Cinema...

Oh my god, I finally went to the cinema again! It's been weeks since I last watched a film, cinema or no (I've had A Woman Under the Influence on rental for two and a half MONTHS now. Tell me that isn't ridiculous. And, yes, I'm sure it's great, but it sounds like a downer and it's so long and it's Wimbledon fortnight now and... ugh. Excuses abound. I'll watch it eventually.).

Wanted is the kind of film I shouldn't like, really. Comparisons have been made- they're obviously there- with The Matrix, and I hate that film, so it's almost like I'm being hypocritical here. But James McAvoy is no Keanu Reeves, Angelina Jolie is no Carrie-Anne Moss and Morgan Freeman is no Laurence Fishburne (well, it doesn't entirely work like that, but...). Basically, Wanted is frisky, fun and genuinely exciting, and, unlike The Matrix, it almost seems to see its central "philosophy" as a joke. It's certainly much more an interior philosophy than the Wachowskis, by which I mean that it is the characters' choice to believe it, as opposed to being the foundation of a universe. In simpler terms, The Matrix had its head up its arse, and Wanted doesn't.

A film like this lives and dies by its casting. If I don't like the performers, I'm not going to like the characters because what character there is boils down to a couple of talky scenes (and a fair amount of McAvoy voice-over, which for some reason doesn't quite work). But do you really need to know the background of Angelina Jolie's foxy assassin Fox (huh)- which we get in a sombre little interlude- when we see her lying backwards on and firing bullets from the bonnet of a sports car that McAvoy is driving from the passenger seat, or listening to McAvoy's girlfriend whine at him and deciding to help him out (in the nicest way possible)? Wanted is low on character but it applies it in the right places, building to a finale that pales only because it's been preceded by a stunning set-piece involving a high-speed train and a bridge. Director Timur Bekmambetov has honed the high-voltage visual techniques that fell flat in the Russian blockbuster Night Watch and cleverly uses them to increase identification with McAvoy's Wesley Gibson. McAvoy's charisma remains intact in the new Hollywood environment and Jolie is on sizzling form too, taking a blockbuster-break between projects that are cementing her status as a respected performer. I could have lived without repeatedly being told what average losers we all are, but the only lies Wanted is telling its audience is that a bullet trajectory can be curved. B
Posted by Dave at 11:05 pm 1 comment:

1. A lot of its humour was roundly predictable. I think the moment that most exemplifies this is when Ralph Fiennes, in his first scene about half way (or perhaps even further in than that) through, angrily calls his wife an "inanimate object". But then, of course, the foul-mouthed hard-ass gangster lord (I assume) is going to softly apologise in the baldest terms possible. It just falls flat, and it does it too often- jokes like the American tourists rev up but suddenly conk out.

2. It went all weepy and emotional in so strong a way I'm surprised it didn't turn around and start calling itself gay, as seemed to be the prediliction of the film's central characters. 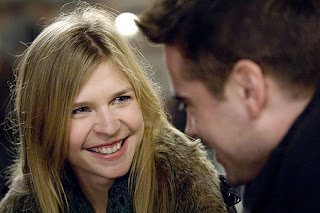 3. The well-built tension in the developing relationship between Ray (Colin Farrell) and Chloë (Clémence Poésy) came to a complete halt and she just became the crying girlfriend. The pregnant hotel owner was better characterized (and, let's be honest, more fun).

4. The dwarf (Peter Dinklage) cliche being upturned was done in such an obvious and boringly predictable way- particularly the way he was 'defeated'. Not good enough. Same goes for that debacle in the park with the guns.

5. The theatre was packed. Now, this wasn't in any way In Bruges fault, because, god knows, I'd never have thought so many elderly people would want to see a movie about Irish gangsters who swear incessantly going on a trip to Belgium. But being squeezed and forced to watch with about a fifth of the screen impaired greatly reducing my viewing pleasure, and if the film hadn't been so damned attractive to so many people- who were all where, exactly, when I went to see Dark Horse, or Away From Her?- then it wouldn't have happened and I'd have been able to watch in comfort. Which would, possibly, have helped me enjoy it more.

That said, I did like the narrative point on which the ending turned (no spoilers, people), and Farrell and especially Brendan Gleeson were very good. And the pregnant hotel owner was superb. C+
Posted by Dave at 4:56 pm 1 comment:

Men Always Win, Even When Women Beat Them 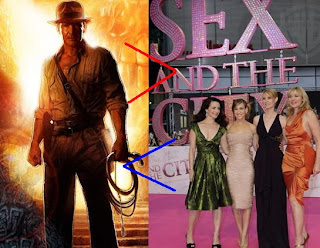 Diverse opinions on how the new Sex and the City film fits into today's culture are causing a furore, but I've got a different bone to pick here, and it has to do with the British media and their response to the British box office. As in America, the fourth Indiana Jones film opened here on May 22nd, and the Sex and the City film followed a week later. But while reports of the box-office results in the U.S. are all 'surprise: women do go to the cinema!', the UK media seem to be playing a very odd trick. What do headlines like 'Sex fails to match Indiana in the UK' and 'Sex and the City? We'd rather take a trip with Indiana Jones' suggest to you? Because when I first read them, I assumed that Indiana had held onto the top spot and the New Yorkers had taken second place. But no. If you can work around the bizarre narrative of the articles, you'll discover that this week's box-office champ was actually Sex and the City, which grossed about £8.7 million to Indiana's £5.5 million (figures here).

So why are these articles so focused on the fact that Sex and the City's opening weekend doesn't match Indiana Jones' opening £12 million? Why does it matter so much? Quite frankly I think it's quite amazing that a film based on an American television show that surely can't have had that large an audience (Channel 4 is less widely watched than other channels, and American imports, much as I love them, aren't generally watched by too many people) has made so much money. Seriously, £8.7 million is a huge haul, and I hardly think it's fair to compare it to a big action-adventure family franchise comeback. The two films are completely different, appealing to completely different audiences- and aren't some of Sex's audience going to be the ones dragged along by partner/children to see Indiana as opposed to the other way around?- and such a comparison is, quite frankly, ludicrous. Both have been hugely successful- so why slam one's success?

p.s. Apologies for the horrifically rudimentary graphic. I only have Paint, but isn't it more exciting than just the posters?
Posted by Dave at 12:13 am 1 comment: