It's the return of the capsule reviews! They're just so handy. Here are some thoughts on the last five 2007 releases I've seen.

It's been a few weeks now, but the last 2007 release I saw, on DVD, was Bridge to Terabithia. Point number one. Gabor Csupo, the director, is also the man behind the Rugrats. This makes him a very important person in my childhood. Point number two. I had never heard of- and therefore never read- Katherine Paterson's book on which the film is based. These points have no connection and no real bearing on anything, but I just thought I'd mention them. As for the film itself: I really liked it. It's not a film of particular technical finesse (the special effects are awful, but they're also unimportant, unless of course you're the marketing people...) or great revelation, and some of the scripting seems rather simplistic and trite (particularly the school scenes), but it's remarkably affecting and the central relationship, which is the entire basis of the entire film, is so well acted by Josh Hutcherson and AnnaSophia Robb (whose smile will probably literally kill men when she's older) and so charmingly done (and heartbreakingly broken) that it just makes the heart beam. This might be overly generous, but it's a B+.

It's also a B+ for Black Snake Moan, which is so deliriously absurd it all its off-kilter shots at convention that it's hard not to admire it. Every time I thought the film was heading into cliched, obvious territory, it seemed to take a sudden swerve in a direction I didn't know existed. Its addressing of issues of race and sexuality are at first so blatantly transparent that it seems the film is going nowhere; but it subverts everything, finds new depths in old cliches, and does so with such panache and vibrancy that I just found it rather bewitching. And its good to see Christina Ricci in a strong, challenging role again.

Cate Blanchett, though, finds herself in more familiar territory with Elizabeth: The Golden Age, for which Nick Davis has written such a hilarious, deliciously-constructed putdown that it hardly seems worth chucking in my own piece. But suffice to say, Elizabeth has the gloss, but it is, literally, all surface- poke it, and it shatters. So Elizabeth wore an enormous gardenia for a hat: so what? Director Shekhar Kapur presents all the requisite events of Elizabeth's 'golden age' (as you might expect), but there's nothing in them- no life, no impact, no emotion, no purpose. It's just a story. No one seems to care about it, except to dress it up in pretty clothes and either yell, giggle or whisper at you. It's a C- from me, and most of that grade was earned by the stone walls. Oh, and Samantha Morton.

Once was too a disappointment, though in a markedly different way. I by no means hated the film; I was charmed by the music and the central relationship, but after hearing such great things about the film, I couldn't help expecting a little more. It's one of those films where the two characters don't have names- they're simply 'guy' and 'girl'. And it's not like we don't find out anything about their lives- we go to their homes, meet their families, see their jobs. I don't know what it lacked for me. But there was something missing. I'll get back to you if I figure out what it was, but, for now, it's a (still) tentative B.

And, furthest back in time, we have the rather terrific documentary Deep Water, which screened on tv over here, and concerns the tragic events of one of the entrants of the 1968 round-the-world yacht race. What was great about the film, I feel, was how it kept a superb balance between the central figure of the film and the other entrants- they weren't ignored, forgotten about, simply because they survived. Deep Water, less than focusing on just the one man who died, is concerned with the effect of the 'deep water' on all the entrants, how it affected them all differently. The film is also beautifully narrated by Tilda Swinton, superbly scored, and mixes in some more artistic effects rather well. B+.

That's all for now, folks. Come back soon when uni is done and I'll actually have time to go to the cinema.
Posted by Dave at 12:36 am 1 comment: 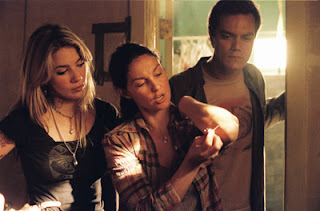 That's right, Ashley. Gouge that ugly Chuck film out of your neglected arm...
I was once told that my being a British non-professional reviewer personage (I gave that statement extra qualification after remembering Mainly Movies) gives me uniqueness in this particular solar system of the blogosphere, and so it is with that backing me that I go into major rant mode.

Months ago, I instructed all you Americans to go and see what is still the best film of the year, Bug. I saw it over a year ago now at the 2006 London Film Festival (2007's Fest has just finished- I didn't go this year). In the just-linked post I mentioned that it, at that point, still had no release date for Britain. This was still true until about a week ago. And then, a few days ago, I discover that it is being released. Today.

All very well, you say. Reviews have popped up- not particularly jubilant ones, but I never expected everyone to like it. (Mark Kermode is a fellow championer, the Good Doctor that he is. He flatly refused to give another film of the week despite... well, I'll get to that.) The thing is, it seems to be being "released", as far as I can see, in about two cinemas. Both in London. There has been, as you might expect having only been shoved into the release schedule a week ago, no publicity. It's like they don't want anyone to see it.

Well, I do. I WANT TO SEE IT. But you don't care about me, do you, you stupid LionsGate people? No, you can give the entire country crap like Good Luck Chuck (and yes, it IS, by astonishing non-coincidence, also distributed by LionsGate), but only twenty people who live in London can see a masterpiece like Bug.

I must open this review by disclosing this little tidbit to reveal just how much I knew about Joy Division when I went into this film: at one point, I was enjoying the music and noted, from pure coincidence, how much like New Order it sounded. Well- says the I having read up on the group- duh. 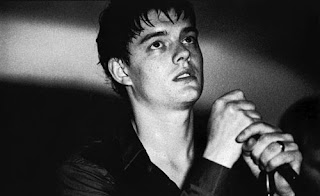 I went into Control having heard warm recomme- ndations, though, in the interest of retaining some sense of freshness for myself, I listening to them with deliberate vagueness. Imagine how surprised, how disappointed I was, though, to discover that Control becomes remarkably stolid and repetative, that it reaches a kind of unnerving plateau as it unfolds, and reduces its internal conflicts- Ian Curtis's internal conflicts- into a cliched, simplistic choice between two women... two women, I may add, who, for all their screentime, barely register, and so, even if it hadn't been a rather dull choice to turn his artistic life into a romantic tragedy, the audience can't invest in it because we can't comprehend what either of these women bring to his life.

The film quickly eschews the trappings that the most prominent musical biopics of recent times- Ray and Walk the Line- set up by opening on Ian Curtis (Sam Riley) as an adolescent, the story rapidly, and scattershotly, seaguing into meeting his future wife Debbie (Samantha Morton) and experimenting with some pills he and his friend find in an elderly woman's house: both, as you might expect, are important later. Martin Ruhe's monochrome photography hangs over these scenes like the impending doom that will arrive: even this happiness is nothing more than empty, useless. The irony of Joy Division's name is that it derives, as is explained, from the prostitution wing of a Nazi Concentration Camp- hollow joy coming from the worst place imaginable. For its first half, Control seems to understand this irony; then it falls prey to it.

Control follows in those aforementioned Hollywood biopics footsteps by having the actors actually performing Joy Division's songs- and its in its musical scenes when Control is at its best. There's a rawness to the music, and to Sam Riley's voice, that seems to connect in a way the rest of the film can't; and these parts are also, somehow, when Riley is at the top of his game, capturing Curtis's oddly un-punkish movements as well as his weird charm. When Curtis later on at first refuses, then attempts and fails, to perform, its possibly the moment the hits us worst, for Riley has shown Curtis in the arena he functioned in, and now that its failed, so has he. But the film never shows us any kind of musical development- where did this music come from? Why does Ian want to live this life (he loves David Bowie, is about the only crumb we're offered)? How does these people function as a unit? Control is interested in Curtis, not the band, which would be fine if Curtis's life weren't ultimately reduced to such simplistic opposements. As it is, the actors playing the rest of Joy Division are interested, well-played but unimportant side-shows, living in Curtis's shadow. 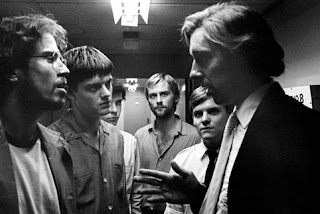 I'm not sure where all the excitable plaudits for Miss Morton have come from, meanwhile- she's fine, as she always is, but for the majority of the film she's simply playing the traditional, cliched downtrodden wife role, and the film ignores her almost as much as Curtis does, which seems rather odd when you consider that the film is based on Debbie's own book about her husband. There's a terrific scene, though, at what I must now assume was about Control's halfway point, where Debbie finally confronts her husband, having spoken to his Belgian mistress Annik (Alexandra Maria Lara)- and its terrific because Morton is finally given the chance to actually do something. Kudos to her, though, for, sidelined and underwritten as her character had been, she doesn't abandon what she'd been doing with her- instead she feeds off it, for even as Debbie is demanding of Ian whether he loves Annik, Morton's body seems to be recoiling as much as it is trying to intimidate- Debbie is simply not made to be angry, to be forceful, at least not towards her husband. It almost seems as though Debbie is simply acting out of the motions of what someone should be doing in this kind of situation- its not that she doesn't feel betrayed, or heartbroken, but the way she would express this doesn't seem acceptable, and so she pushes herself into a feeling she doesn't fit. As Debbie yells at Ian, tries to make him respond, Morton has her hands and shoulders crunched up, somehow making Debbie's words even more powerful- she loves this man so much she has to force herself to shout at him.

But, ultimately, as Debbie emerges stricken from her house, I couldn't escape the feeling that none of this was the truth: wasn't it, always, Debbie's impressions of what her husband was and how she thought he felt, and really, isn't that why Annik is such a cipher, and why Debbie is so innocent and pitied? Debbie never really understood her husband, and that's the point of the film- and that's why it fails. Grade: C
Posted by Dave at 7:59 pm No comments:

Tilda Swinton's narration was hardly the most important aspect of the rather terrific Deep Water, but... can someone please sign her up to read books-on-tape or something? Her voice is perfect: smooth, enrapturing, and kinda unnerving. Which is just what I want in my narrators.