I Have Finally Climbed My Movie Everest

I never intended for A Woman Under the Influence to become my filmic equivalent of Mount Everest. When LOVEFiLM sent it out on the 15th of April, 2008, it was just another film, just another title to cross off the list, just another Best Actress nominee to add to my totals. But things conspired. I became overwhelmed with university work, and then exams. I left it at home when I was at uni, or at uni when I was at home. I simply lost interest in watching movies. So, this disc, in its little plastic sleeve, sat in its envelope, unknowingly becoming an anomoly in my life, as the knowledge of its reputation and the aura of its difficult attitude came to scare me off even more. When it got to two months, it started to become ludicrous, that I had kept this disc for so long, when my maximum turnaround time had before been probably a week. And yet still it sat there, untouched, unwatched.

And then, yesterday, one day after the three month mark had passed, I said to myself: 'self, you WILL watch this film tomorrow, come what may. You will turn on the machine, put the disc inside, and sit down in front of the television.' Today came. Events conspired so that it was half past twelve before I finally slotted the disc onto the tray and it disappeared inside. But it was there. Four times- twice for packages, twice for useless phone calls- I had to pause it, my body shifting around on the sofa between sitting and lying. But I watched it. I reached the summit of my movie Everest. And then, I took out the disc, put in back in its case, slid it inside the envelope along with Battlestar Galactica, and took them off to the postbox. And now, my movie Everest is amongst millions of letters, and tomorrow, I'll get another disc, another title to cross off, another molehill of a movie. Coming down off the summit is not as exciting, or exhilirating, but I guess it never is. 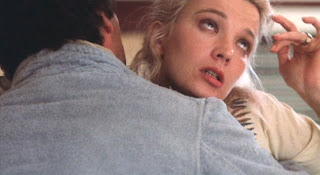 But was the summit itself glorious. I'd never seen a John Cassavetes film before, and I knew this was said to be one of his best. His style is very intense: observent, almost documentarian, and at a few of the most heated points, the camera seems to become hyper-real, the people moving around the frame as though on a stage- I'm not sure how exactly to describe what I'm getting at, but those moments were perhaps the most special to me, where I felt that the camera was most connected with the characters.

Was it a bit too long? Maybe. The last section ('Six Months Later') is a bit overextended and pales slightly with the preceding events but the performances are so superb it barely matters. Peter Falk is terrific, a perfect mirror to the dark and unpredictable Gena Rowlands, who is simply stunning. While you're initially unsure as to whether Mabel actually is mentally ill- as Falk's Nick keeps asking her to 'be herself'- it becomes increasingly clear that she (as well as Nick, make no mistake) is highly disturbed, and Rowlands is acutely tuned to portraying a woman who internally recognises her demons but cannot bare to admit them, is constantly playing a fierce battle with herself and those around her. It's an extraordinarily physical performance- the way that she moves, from her feet all the way to her eyes, is key to unlocking this woman, and it's exhausting just watching how Rowlands extends the writing into her movement. In the year where Ellen Burstyn's Alice and Faye Dunaway's Evelyn Mulwray ran alongside her, saying there's no doubt in my mind that Rowlands deserved the golden statuette says a great deal about just how good Rowlands is.
Posted by Dave at 5:56 pm 2 comments: