The LLGFF exploded my expectations, but also my fingers

The 26th London Lesbian and Gay Film Festival ended a few weeks ago, and I was fortunate enough to have joined the writing team at So So Gay just in time to be part of their team covering the event. Across the event I saw fifteen features, some accompanied by short films, and rounded it off with one programme of shorts. What's more pertinent here is that I reviewed all fifteen of those features and the shorts programme for the website, and that's what this post is about. Among these links might be the big gay hits of the future, or gems you might need to seek out, or sadly films that we won't hear from again. But they're all worth reading about.

In rough order of my affection for them, then: 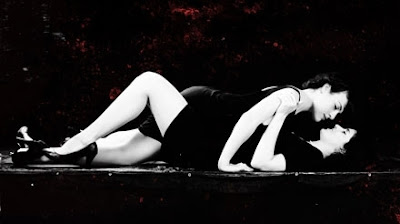 
Registering with an almost inexplicable amount of pleasure, Joe + Belle is an anarchic conflagration of rebellion, danger, romance and political implication. The first Israeli lesbian feature is spearheaded by Kedar, who, as writer, director and star, drives the film to unbounded success. Her energetic, tactile direction never allows the film to fly too far out of reach – delivering such a revolutionary piece with such carefree panache is a commendable achievement in itself.


Tulli’s close camera angles and sharp editing techniques create a film that really feels alive with the sights and smells of the city, bolstered by rich colour photography and a pointed sense of humour. As the film builds towards the triumphant anniversary celebrations, Tulli dynamically depicts a Mumbai that has bloomed into full colour under the progression of a fairer society.


This Is What Love in Action Looks Like motors forward with a sense of purpose, and as part of the filmmaking process come the realities of progressive change – those involved were instrumental in the implosion of the Love in Action programme and the fairer, more open treatment of teenage homosexuals in the wider American culture.


Gulati realises a softly beautiful approach in her documentary. She contrasts the heteronormative society of India, reflected through a prevalence of advertising, with the Western world where the realisation of the new generation’s sexuality is often enacted. The interviews are frequently shifted to a voiceover of slowed, reflective imagery, moving them from the domestic space to the winding streets of India.


Graciously, Alston isn’t blind to the struggles within the shifting church. At least two minutes are devoted to a tearful bishop who brokenly announces that despite her love for the gay members of her church, she cannot reconcile her biblical comprehension with their lifestyle.


Jobriath A.D. mourns the under-appreciation and the loss of a great artist – his music is the dominant soundtrack and feels vibrant with invention – while also celebrating the groundbreaking effect Jobriath had on music culture. For newcomers, this is an enthralling education; for those familiar, this is a paean to celebrate.


What the overwhelmingly charmingBallroom Rules leaves you with is a sense of the bountiful possibilities that these dancers have revealed. Oh, and a huge grin and maybe something in your eye.


Hanna Hogstedt’s intimate depiction of an unconventional romantic utopia is delivered with a gentle humanity that connects the drama to the most familiar emotional concerns. Through the collaborative and symbolic effort of tearing down the wall, a raucous housewarming party, an intimate twilight tryst and an awkward morning after, the dynamics of the relationships shift in unpredictable ways.


The women’s discussions of their experiences leads Penzhorn to focus her documentary more of the issues of race embedded deep within the country. Kelly in particular provides some incisive musings about how ‘profound the logics of apartheid were’.


The Skinny never forces neat resolutions and easy forgiveness. A sequel beckons for these characters, and though the lessons they learn aren’t revolutionary, and they might have grown from Sex and the City-esque character types (Magnus wants the 2.5 children; Kyle is Samantha), it’ll be hard to resist spending more time in their sexy, sparkling presence.


Although it seems petty to complain about sexism in a film concerned with the breakdown of gender roles, Lady Jaye’s scant presence – she often exists as a mere haunting giggle – is the film’s inherent weakness. Losier constantly delves back into aspects of Genesis’ past and arcs these entangled narratives towards the present, but only once does Lady Jaye’s life receive the same treatment, as narrated by Genesis.


Difficult Love feels a little unevenly constructed, with an overarching eschewed narrative. However, as a portrait of the power of the creative, challenging patriarchy and homophobia without their violent tendencies, it isn’t difficult to admire.


It’s hard to really dislike such a sweet, bubblegum romance between such a likeable pairing. But the film almost turns into a strange checklist of every romantic cliché in the rulebook. There’s a dramatic confrontation in torrential rain, one character eavesdropping on an emotional declaration, an obsessive rival threatening suicide, and so on.


Filmed in vast widescreen, you’re unlikely to happen upon a film as beautifully shot as The Mountain very often. Cinematographer Oystein Mamen is attuned to every breath of wind on every blade of grass, working with the sound designers to make the mountain a third character in this sparse drama.


Budget constraints obviously contribute heavily to the small, overexposed location shooting, but the close camera work feels like an imposition on the engaging performances of the actors. Worse, this style neutralises every space, so that the sense of danger inherent in the visibility of the alternative lifestyles with the London cityscape never connects, even when events take a darker turn.

Of course, you shouldn't forget to check out the rest of the reviews on the SoSoGay website - the most comprehensive coverage of the festival you'll find anywhere, and all top class. I mean, it's unlikely that I bagged all of the great films.

Image from Joe + Belle courtesy of bfi.org.
Posted by Dave at 5:00 pm No comments: