The film's UK release, scheduled for 28 December 2007, has been postponed indefinitely because of the film’s similarity to the real-life case of four-year-old Madeleine McCann who disappeared from the holiday apartment where she and her family were staying in Praia da Luz, Portugual, on 3 May 2007.

Now, I don't want to get shot at by people saying I'm being insensitive. I feel for Madeleine's family, I really do, it's a horrible thing to happen to a child. But how is releasing an American film with a similar story that probably won't even be shown in more than three cinemas going to make any difference? If people don't want to see it then they don't have to. It's not as though Ben Affleck was searching to exploit this case, is it? If the media hadn't blown this case up so much in the first place there'd be no problem. (Because no other children were kidnapped this year. Just this one.) These people seem to think that everyone'll blow up at the slightest thing... do they give us no credit at all? I think we can separate life from the cinema screen. It's probably more about the fact that they think no one'll go and see it if they release it now. Newsflash: people who care now will still care in a year. So unless you're never going to release it at all...

In other Casey Affleck-related news, I finally saw The Assassination of Jesse James by the Coward Robert Ford today and thought both he and it were excellent, though it's still settling in my head as to any coherent thoughts. But I was glad to see that the film had actually moved up a place on the UK box office charts... until I looked closer and saw that it had still gone down 33%. Still, that's twice better than most on the chart... except Fred Claus, for some horrifying reason. Thankfully, most people were off seeing The Golden Compass. That's a rare family outing scheduled for next week for me... before then, I'll be checking out We Own the Night and either Beowulf or Enchanted (still hoping for a family viewing of the latter, too, but the jury's currently out on that). As for blog activities, I'll be bringing you my review of the year's music very soon...
Posted by Dave at 7:45 pm No comments: 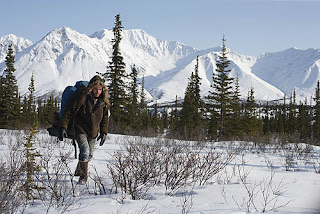 I think that you have to recognize the blindspot Sean Penn surely had while making this movie- indeed, the film would probably not exist without it, for had Penn not been so enamoured by this story, he would not have worked so hard to get it made, and it probably would have dropped out of sight. So, with the film's reason for being also comes its inherent weakness, and one that, surely, can only be laid at Penn's door. He is too enamoured of the story. He is too in love with the idea of what Christopher McCandless did to really get across the deep ironies ingrained in the story. Read reviews or comments on this film and you seem to get an unsurprising thick line drawn between two parties: those who see Chris as some kind of a hero, and those who think he was a selfish, foolish idiot. The book, although I haven't read it, on which Penn bases his script, apparently have a more balanced version of things, seeing Chris as both a hero and a fool, and this is how, despite the way Penn tries to skewer things, I saw him: what Chris (played by Emile Hirsch in a terrific performance) did was brave, commendable and free-spirited, but at the same time he was undeniably rather foolish, clearly not prepared for what he wilfully treks into. Jena Malone, who spends more time narrating than appearing as Chris's sister Carine, at one point speaks of how Carine feels a bit hurt, a bit betrayed, that Chris didn't try to contact her, even if his reasons for abandoning his parents (played by Marcia Gay Harden and William Hurt in roles that are remarkably small and really don't deserve them) are made clear- Chris's reasons are obvious, understandable, and even sympathetic, but in his desire to cut himself off from human relationships he fails to realize that family is something that you can't ever cut yourself off from- tellingly, and in one of Penn's best moments of actual insight, the film opens with Harden waking in the night and distressingly announcing that Chris is dead.

Penn can't keep the balance, but many of his other decisions are interesting: though this structure may come from the book, I found it fascinating how Penn interweaves Chris's journey (accompanied by four chapter titles, rather unsubtly representing stages of life) with what is, essentially, his death- several months on the "Magic Bus" where he was eventually found. Commendably, too, Penn doesn't just glory in the wide, open, gorgeous landscapes, all showing us an America that we've really never seen before in the movies, but in the minute details of nature, too- insects and plants photographed in close-up, as if they're as massive as the imposing mountains. Penn's blindspot as a human is made up for by his growing skill as a filmmaker (this is a long way from the stolidity of The Pledge), and, if nothing else (I hasten to add it is more than this), Into the Wild is a beauty as a visual spectacle. Grade: B
Posted by Dave at 3:41 pm 2 comments: