Alice in Wonderland is somewhat of a misnomer. Oh, Alice is here, alright, although older and possibly a bit wiser than you’d expect; she’s not in Wonderland, though. Apparently she misheard - it’s “Underland”. A joke that suits Tim Burton’s gothic sensibility, maybe, but it also reveals that Lewis Carroll’s classic children’s book and the director aren’t really the perfect fit they initially might seem. Fact is, Burton’s a far cry from his Edward Scissorhands days - for my money, far and away the finest film he’s ever made - and critical favour towards his watered-down black magic has been waning, even as box office figures balloon in the opposite direction. Underland is less delightfully insane than Wonderland ever was, and the fantastic dress-up Johnny Depp and Helena Bonham Carter do is more pantomime than anything else. Tim Burton doesn’t celebrate and cherish the odd anymore; he was thrust into the mainstream and the only thing they do with weirdness there is laugh at it. 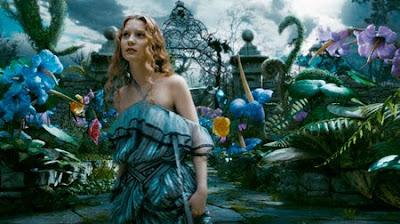 You only need remind yourself of the tiresome addition of a humanizing father flashback for Willy Wonka in Burton’s adaptation of Charlie and the Chocolate Factory to see that Burton is afraid to let weirdness stand tall and proud these days, and it’s much the same here. Lunatic supreme the Mad Hatter (Johnny Depp, but of course) isn’t the incomprehensible oddball of the novel but someone haunted by the past, and while Depp carries this damaged persona off surprisingly well it can’t help but jar, not least because it thrusts him so far into the forefront of the story they might as well add him to the title. I’ve yet to hear any good reasoning behind Burton’s invention of this whole additional story - the original story’s immense charm and appeal was in its freewheeling, loose nature, and that’s something you feel Burton of old could have carried off. This new story arc is yawningly traditional, and the darkness of feeling the added years (Alice has returned to Underland now a young adult) drags the charm down into the mud. 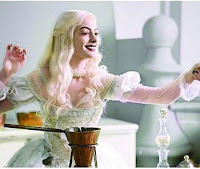 I’ll take the good points where I can get them, though. While a story focused on Alice would have been preferable - that is, one that doesn’t cut away from her entirely as this does - Mia Wasikowska isn’t really a strong-enough screen presence to maintain that sort of thing. She’s pleasant, but slightly innocuous. So despite the mangling of source material, one queen becoming two provides more queen for your dollar, and both Helena Bonham Carter and Anne Hathaway deliver. It may be becoming a bit boring to see Bonham Carter in every film her partner makes, but she was always the perfect fit for this role - a screaming, impulsive, big-headed (literally) tyrant. Better, though, is Hathaway, whose White Queen floats around airily and angelically whispers her commands, but Hathaway strikes the ironic notes of someone who’s clearly not that perfect, who may be better than her sister but knows it, relishes it, enjoys their childish animosity.

In the end, it’s all about expectations. I long gave up expecting Tim Burton to impress me. Maybe sticking to the original story would’ve brought out the spark in him again, but he didn’t do that and instead he just poured drab darkness over it. His regular collaborators feel a bit freer here than they have done previously, but one senses Burton and co have fallen into a routine they could walk in their sleep. And Alice in Wonderland might be a dream (or is it?), but it’s a fantastical one, a bizarre one; not one with such inevitability to its tread. It feels less like something Burton would want to make than something concocted in a clinical studio boardroom, and he was just the weird director for hire. C-