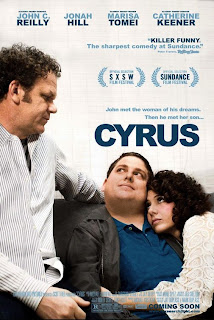 These days, it is a sad fact of life that John C. Reilly only stars in comedies, despite the facts of his not being funny and his being very good at soulful dramatic acting. But whatever. If that’s what he wants to do with his career, so be it. Cyrus is a comedy – the quote from Peter Travers on the poster tells us so, because that man knows everything. Oh, one problem here: Cyrus isn’t funny. I suppose I should’ve guessed that the poster might be telling porkies, since it expects us to swallow the idea that Marisa Tomei somehow managed to give birth to Jonah Hill, but you trust a movie poster, don’t you? Hanging there innocuously in the cinema hallway, battling for attention with all its comrades. You swallow what it tells you. If you like what it tells you, you go and see it. Cyrus tells me “Marisa Tomei”, so I see it.
Not only is Cyrus not funny in the slightest – to be fair, I’m unsure precisely how funny it’s intended to be; just because Peter Travers found your film hilarious doesn’t mean he intended it kindly – it’s also one of the strangest films I’ve seen in the last year. Not in terms of the plot, which unfolds in exactly the distressingly obvious way you’d expect it to, or even in terms of the acting, which, to give these people their due, is perfectly acceptable, because these are perfectly acceptable thespians (even Jonah Hill, who might be picking projects that suggest he’s a horrendous human being, but who I actually quite like in his strangely mumbling way). No, all this is fine, in its completely boring way, but it’s all filtered through the most excruciatingly long style you’ll ever encounter.
It’s hard to explain what I mean, because I’m not even talking about the dreadful camerawork, which wants Cyrus to be a handheld indie film even though it’s as glossy as anything and the script and acting is all pitched at Mainstream Hollywood Movie level. The best way to capture what I'm trying to say might be to borrow Nick Davis’ use of the phrase “dead air” – Cyrus, basically, is dead air. Almost every scene feels stretched to infinity, but not even because nothing happens – they’re talking, always talking, but what they’re saying, they’ve said before, or even if they haven’t said it before, you’ve heard it before in another movie. Cyrus is one of those films that mistakes uncomfortable situations for humour, instead of actually making them funny, and so when we’re clearly supposed to be rolling in the aisles at the wide-eyed looks Jonah Hill gives to John C. Reilly behind Marisa Tomei’s back, we are in fact pulling our own eyes out of their sockets.

As such, it’s actually quite an interesting – in theory only; the film is abominable, in case I haven’t made that clear yet – move for Reilly and Hill to have made. From the outside, I figured it for another Apatowian (it’s 3am, I am allowed to invent adjectives) fratpack movie, since both actors have made that sort their bag of late. But there aren’t any fart jokes, or sexual innuendos (beyond an intentionally woeful dinner table scene, and those are decidedly nuendos), because, well, there aren’t any jokes in Cyrus. But this is actually supposed to be a “mumblecore” movie, which rather makes sense, because despite all the talking there’s so little to the script here I have to wonder if one ever existed at all. It's hard to develop any kind of intelligent critique on a film that isn't merely without intelligence, but seemingly even without a brain, which might explain this flippant piece that I've garbled out in the middle of the night. But I could just as easily call Cyrus a Greek tragedy, and if I was as famous and respected as Peter Travers I’d probably land that quote on the poster, because Cyrus is, in its own excruciating way, a bit like a piece of true modern art: it can mean whatever you want it to mean.
Posted by Dave at 3:48 am No comments:

[If you’re unlucky enough to follow me on Twitter, you may have been irritated recently by my occasional quoting of Easy A, a film that I’d watched and enjoyed – mostly, as you may have heard from everyone who’s seen it, for Emma Stone’s star performance at the centre – a few months ago, but which has been on my mind lately because it was one of the set of ‘contemporary teen films’ I’d chosen to write an essay on. The following thoughts are an aspect that didn’t make the cut of my essay, but I thought them intriguing to note nonetheless. Spoilers for Easy A and Saved! follow.]

Easy A draws many inevitable comparisons to Mean Girls – teenage girl who wants to be popular spins some yarns to make herself the hit of the school, realises she’s become horrid person in the process – but one way in which they are practically identical is the parental figures within them. Easy A has more fun with Olive’s (Emma Stone) parents than Mean Girls did with Cady’s (Lindsay Lohan), but that’s probably due in large part to having landed actors with the wit and loose charm of Stanley Tucci and Patricia Clarkson - although that’s not to slight Neil Flynn and Ana Gasteyer, who certainly have their moments of fun rapport alongside Lohan (“What are my tribal vases doing under the sink?”). But the point here is that both sets of parents are supportive, understanding ones – and that’s the thing about the teen film in recent years. The parents aren’t the enemy anymore. No longer are they ignoring Molly Ringwald’s birthday or telling Winona Ryder to take the Volkswagen or just generally being repressive, old, MEAN old windbags who you’re better off only seeing at holiday gatherings.

But if the parents have turned into funny free spirits (“Spell it with your peas!”), we need to find a new enemy, or the poor teenage heroine (they’re usually girls these days) will have no one to beat down in moral victory. So while the enemy in Mean Girls is fairly self-evident – it’s, well, the mean girls – Easy A tackles a new villain: religion. Seemingly so characterised to ape the self-righteous Puritans of Hester Prynne’s world in the very self-consciously referenced The Scarlet Letter, Marianne (Amanda Bynes) and her conservative church group are the type who smile and pray for those they burn with hatred for.

The film’s approach to this all doesn’t seem particularly well thought-out – Marianne thaws towards Olive, and then freezes again, all within about ten minutes of the film – and it rather half-heartedly throws in a sequence that is nevertheless useful to make clear what exactly might be going on here. Olive, overwhelmed with others’ ideas of her as a “slut” and a “whore” and her own knowledge that she made up the lies that provoked them, suddenly decides she needs religious guidance. She may end up pouring her heart out to a non-existent priest, and then happening upon a pastor who turns out to be Marianne’s father, but the fact is, spirituality exists as a valid concern for Olive, who might otherwise have seemed to be from a bohemian, agnostic family.

For a similar, if much more thorough, example of this, we can look back to 2004’s overlooked Saved!, with Jena Malone battling against her religious high school when she gets pregnant as a result of trying to ‘save’ her possibly-gay boyfriend. Interestingly, the main adversary here is, like Bynes, a former good-girl teen star, although Mandy Moore thankfully looks slightly less inflated than her contemporary. Moore’s Hilary Faye is a more foregrounded, and so much more vital, counterpoint to the struggling heroine than Marianne, and, while Easy A understandably casts Marianne aside, Hilary is central to the climax of Saved! and the nub of the point it rather bluntly makes.

The reason for this intriguing new choice of conflict in films concerning today’s youth isn’t merely that social mores have progressed so that challenging these things is only now okay. Films have been there, done that, somewhere around the 1990s. Both Easy A and Saved!, in their rather awkward ways, push a mediation – religion is fine, and a belief in God is good, just as long as you aren’t so extreme about it. And there’s the word – extreme. It seems fair to argue that post-9/11, people weren’t sure where to tread. Roger Rosenblatt famously declared that it was “the end of the age of irony,” but no one was ever going to be so backward as to go back to a sheltered, conservative world where no one questioned anything. (Well, not in the film industry.) 9/11’s innate connection to extremist religion provoked two simultaneous, divergent reactions. One: against religion, taking this as another example of the kind of horrors organized religion can provoke. Two: against other religions, taking this as an example of what the “wrong” religion can do. Either way, religion was back at the forefront of discussion, and a viable source of everyday conflict.

The latter reaction would be the viewpoint of many of the characters in Saved!, and likely of Marianne too, but these films both seem to reflect the ultimate point of Rosenblatt’s declaration: “In short, people may at last be ready to say what they wholeheartedly believe. The kindness of people toward others in distress is real. There is nothing to see through in that.” Of course, we’re not dealing in death and terrorism here, but both Saved! and Easy A reflect that kind of proclamation of equality and generosity of spirit. Easy A’s Brandon (Dan Byrd) has an effective dramatic scene that showcases a kind of oppression that isn’t often depicted anymore (Nick’s gay bandmates in Nick and Norah’s Infinite Playlist have a more functional love life than he does), but it seems rather befitting given the Prop 8 struggle in California over the past few years – being gay still isn’t okay for everyone. Saved!, of course, lives in an even more repressive locale than this, where most things aren’t okay for anyone. But Brandon does a Huck Finn, and the gay teens of Saved! who’ve been sent away crash their prom to protest their right to be treated equally.

And in this inclusive spirit, of course, neither Marianne nor Hilary are beaten down by Olive or Mary (Malone). That’d just be mean. Instead, Marianne’s grievances are replaced with simple anger that Olive “slept with” her boyfriend Micah (a blank Cam Gigandet) (which, we can only assume, evaporates when she sees Olive’s webcast, though the film eschews any kind of “realisation” moment), and Hilary Faye is subject to a slightly pathetic end where she crashes into a giant statue of Jesus and asks her brother (Macaulay Culkin) if Jesus still loves her. Neither a happy ending, neither included in the heroine’s picturesque endings, but they’re not demeaned, and they seem to realise their mistakes.

The age of irony didn’t end, but the age where irony defined everything did. Our world has become so entrenched with cycles of cultural referencing that this type of teen film, a smarter subset than the more juvenile Hollywood blockbuster comedy, has to employ a certain amount of irony simply in order not to look naïve. But there’s nothing ironic about their romantic finales, nor about their sweet messages of equality. Perhaps you wish they didn’t have to tread so carefully, but there’s a certain amount of respect to be had for films that don’t so much want you to like them, but want you to like each other.
Posted by Dave at 12:03 am 1 comment: