screened as the Jameson Gala on September 22nd; also screened 24th and 25th 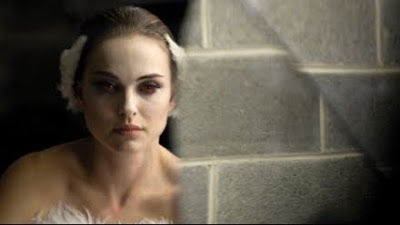 The enduring effectiveness of Swan Lake suggests some intrinsic value in a story consisting of simplistic oppositions, even if it’s richer than it outwardly appears. The black and white colour scheme of the tale does not merely restrict itself to the decoration, of course, but inhabits the story itself: white is good and black is evil, and so on. By adding a splash of devilish red, Darren Aronofsky risks collapsing the delicately conflicting balance, but there has always been a more complex element to the fairy tale that is potentially much more damaging to fiddle with. The prince may fall prey to the vampish sexuality of the black swan, but the pure white swan he falls in love with in the first place is a damaged, sad, doomed woman rather than a purely innocent figure. By piling the complications of this story into one character, Nina (Natalie Portman), Black Swan risks cracking under the intensity of such psychological proximity. Though it theoretically, and increasingly formally, mimics the style of a ballet, Black Swan has to at least loosely tie itself to a sense of reality so we can make sense of it, and so the interiorized psychological approach it takes is somewhat inevitable.

Writers Mark Heyman, Andres Heinz and John McLaughlin are understandably wary of the complexity of mapping out the tale of Nina’s incoherent collapse as being inside her own damaged mind, but their lamentable approach is basically to divert in the opposite direction. Nina is less a protagonist than a victim, not someone who motivates the downward thrust of the script but is instead trapped in its clichéd ideas of familial oppression, realisation of sexuality and the mixture of physicality and psychology demands from her work. She is never defined apart from the darkness, from the moment she first glances at her reflection in the eerily depicted subway window, and is less of a character for it; only a headcase, not really a woman. This is not Portman’s fault, and you do see her working valiantly to deepen Nina’s narrative, to inflect a sense of independence into the part, but Aronofsky mostly directs her merely to react, not act, to gasp and widen her eyes and flinch and shout. There is fragility to Nina’s physicality that is all Portman’s, and without this the film might collapse completely, but there is so much possibility in the strained expression and nervous walk and their accoutrements that no one but Portman is interested in.

The necessarily telegraphed emotional style of ballet seems to recall Aronofsky’s own The Fountain, which channelled such primordial, florid emotions through its wild, impossible imagery. This makes it more difficult to comprehend why Black Swan fails at such a similar task. It isn’t the emulation of ballet’s narrative or formalistic aspects, because the delicious absurdities that Nina’s nightmarish imaginings (or are they?) reach follow through Aronofsky’s fantastically dark impulses to such effect that the film almost takes flight through style alone, rooted in a vague kind of connective tissue through the few successes Portman makes of understanding Nina. It seems, rather, that where The Fountain’s indulgent psychologies reached for a kind of transcendence, Black Swan seems content to nestle its mad flourishes in unilluminating, clichéd arcs. Vincent Cassel’s ballet master would make the same accusations of Black Swan as he does of Nina: it can’t let go, it can’t stop focusing on the technique of its performance. It can’t lose itself in an overwhelming, emotional story because someone hasn’t built one.

The script is too concerned with modulating between Nina’s mind and the reality of the world around her – something it makes a hash of anyway – and this becomes obvious in the ending, where Nina’s acceptance of her fate loosens the film’s grip and lets the blurred line between interiority and reality become unimportant, or even celebrated. There are scattered moments where it does this – Nina’s childish attitude towards sexuality bursting through as she bites Cassel’s character through a kiss, the manic horror of a visit to Winona Ryder’s hospitalized ballerina, and a key moment where Nina questions her psychology most vividly – but mostly it focuses on this divide to the detriment of any intriguing sense of character. Mila Kunis’ spry, sexy doppelganger walks this divide – necessarily defined through Nina’s psychology, she nonetheless comes to define a large part of Nina (through what Nina isn’t, and what she becomes) because Nina’s own characteristics are so thin and undefined. Ultimately, Black Swan is less the story of a ballerina’s descent into madness than the portrait of a woman who happens to be mad – the barest shadow of Nina exists before her freefall, and Portman can’t even pretend to invent one because the production affords nothing beyond giant stuffed animals and music boxes in her bedroom.

When a film like Black Swan comes along, a whole congregation of people breathless in anticipation over it, any disappointments you find with it are hard to ignore. In fact, despite the catalogue of narrative problems, the aesthetic and thematic elements of Black Swan pack quite a ferocious punch, even if they’re often too slavishly exacerbating the film’s problems. There was never any doubt that Aronofsky had set himself a difficult task trying to get his style and this story to actually spark into the remarkable kind of experience they seem designed to make, but for every decadent flourish that burns onto the eyeballs there’s a tired cliché rolling out of someone’s mouth, and Aronofsky clings just a little too tightly to a normalizing narrative that immersion in the style proves an elusive quality. Lose yourself, Darren. You’ve done it before.
Posted by Dave at 5:10 pm 1 comment: