I'm going to be honest with you right from the start: I don't like either of the films that are listed in the title. 17 Again is a rotten example of the complete lack of invention in both comedies and teen films Hollywood shows these days, and, while I'll give Funny People credit for making an effort, it just didn't come off very well. The actress I'm going to talk about is a bit trapped in the system, really, what with being married to the director of many of the wave of 'bromance' comedies that dominated the second half of the 2000s, but, nepotism or not, Leslie Mann has slowly been becoming more and more of a shining light in Hollywood. And she was the silver lining in these two films.

Scarlett O'Donnell in 17 Again and Laura in Funny People 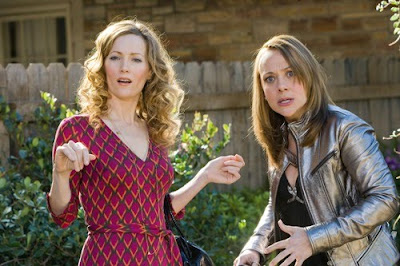 As almost the only adult female of any depth in either film - as already noted, Judd Apatow films are dominated by men - Miss Mann (no jokes please) is saddled with more dramatic arcs than any comedic moments, although this is by no means supposed to suggest that she isn't funny. Her understably confused attraction to Mike (Zac Efron), her ex-husband back in younger form (although of course she doesn't know that), takes on a more dramatic bent but the first moments of it are pure comedy, and well played by Mann. It's very cartoonish - Efron's face is surprisingly doughy - but as ever with Mann, there's more to this. She's transfixed by him, as if some part of her brain registers that this IS her ex-husband, though of course common sense can't let her admit that. Her line readings are slowed, as if her brain is too busy trying to figure out what's going on to let her speak properly. "You wait here, I'm gonna go smell him," she says to her friend, her matter-of-fact pointing emphasizing how she currently finds that a completely normal thing to do. Scarlett is the audience surrogate - the stable character who has to make sense of being thrown the same person in two different forms. She is the heart of a movie that's rotten on the outside with idiotic comedy and lame slapstick, but there's her light flickering at the centre. 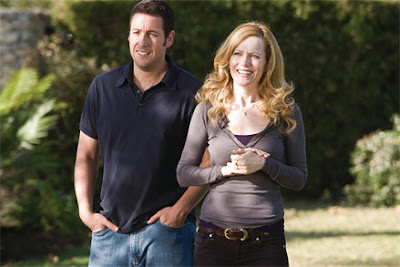 In Funny People, she's again positioned as one of the film's more dramatic parts, and, while her most notable 'comic' moment (aping Eric Bana's Australian accent) doesn't work at all, it's another of her scenes that's stuck in my head. George (Adam Sandler), her childhood sweetheart, has come back into her life and confessed his love for her - and Laura's reaction is heartbreaking. It's a moment that feels genuinely sad after all of George's rather pitiful gloom and askings of people to kill him. She doesn't lie, like you might expect her to; she freely, tearfully admits that yes, she still loves him, and yes, he fucked it up and now she's married and she can't do anything about it. (And she doesn't care, ultimately.) Her antagonistic - but complicated - relationship with her husband (Bana) is the most deeply felt and real aspect to an otherwise bloated movie, and, previously mentioned accent-shenanigans aside, the pair work in tandem to provide both believable family drama and comic lightness.

Leslie Mann is the star of neither 17 Again or Funny People, but she makes herself the star, and not through any selfish scene-hogging. She's a generous actress, a real member of any ensemble she finds herself in, yet by her very nature she marks herself out, by her warmth, her comedic skills, and her empathy. She received notice back in 2007 for Knocked Up, but she knocked her game up even more notches in 2009 and I hope she is given more chances to impress - maybe even gets a vehicle of her own.
Posted by Dave at 8:12 pm 2 comments: