What Disney Does To You (And Me)

I am a child of Disney. Actually, wait. Change that. I am a half-child of Disney. Call me a step-child of Disney if you want, which helps with the familiar characterization (which ironically enough is of course endorsed by Disney in Cinderella) of the step-parent (which here is Disney, keep up) as an outwardly lovely but privately absolutely evil taskmaster. Anyway, I call myself a half-child of Disney because while, like all other children in the Western world, me and my siblings were raised on Disney movies- Beauty and the Beast and Fantasia remain to this day two of my all-time favourites- but we weren't, unlike almost everyone of my age I've since encountered, raised on all of them. We may have practically worn out those videotapes of Bambi and Sleeping Beauty, but I didn't see The Lion King or Aladdin until I was sixteen (at the imploring of a schoolfriend), and I have somehow managed to live thus far without ever setting my eyes on Pinocchio. 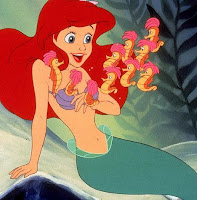 To get more sharply to my point, the other night I finally got around to filling another gaping hole in my Disney checklist, the vaunted 1989 film The Little Mermaid. Disney, as you might expect, removes all the rough edges from Hans Christian Andersen's dark fairy tale, and changes the original spiritual ending for their traditional romantic one of prince and princess living happily ever after. Still, it's a pleasant concoction, buoyed by a fantastically ripe villain in Ursula the Sea-Witch and, of course, the bizarrely (but wonderfully) Jamaican crab Sebastian, who provides the film's highlight in the sensuous 'Kiss the Girl'. Indeed, if I'd seen all this as a child, I'd most likely have fallen head over heels in love with it, have watched it countless times, and been able to recount it all to you now- as I probably could right now with Beauty and the Beast, with which all the aforementioned things did happen. As I've just turned twenty-one, things aren't quite the same. Which makes it more apparent than ever that what these Disney films rely on, deeply, is nostalgia. The youthful mind is probably unlikely to question the idea of sixteen-year-old marrying... well, simply marrying, really, or make the eyes roll at the alarming superiority shot through in Ariel's wistful song about wanting to be human. I could probably go and pick holes in Beauty and the Beast in a similar manner, but I don't want to. If I watched it now, I wouldn't question it at all. But I can't help doing it when coming fresh to The Little Mermaid. My analytical thought processes can't resist it.

It's interesting to look at Disney now. Their traditional hand-drawn animations lost their lustre when compared to Pixar's cleverer animation and conceptualizations of the various worlds they set their stories in. They left their princess stories behind- Pocahontas is probably the last one that could fit that mold- and inspiration, as well as monetary success, tailed off. So what of this December's The Princess and the Frog, the studio's first 2D-animated theatrical release in five years? The title obviously gives away that this is indeed a return to their princess mold, and the trailer promises that it will be "in the tradition of Walt Disney's most beloved classics". I could pick holes in that (the unusually arrogant nature of the prince, which must surely be changed over the narrative; the New Orleans setting, probably ripe for more caricature than ever if they're not careful), but I'm wondering who the audience for this is. Do today's kids (I'm so old...) still grow up on Disney's "beloved classics"? Or is it their parents- some of whom, though it's frightening to think it, are my age- that will be dragging their kids along, eager for a fresh burst of childhood nostalgia? Will the "tradition" of Disney's formulas be as successful today as it was back then, or have things- technically, moralistically, socially, whateverly- changed too much? Can 2D-animation measure up to Pixar, and who are Disney hoping this will appeal to? Is this project simply chasing a ghost?
Posted by Dave at 8:00 pm 3 comments: 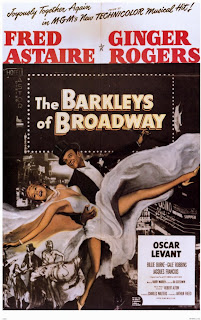 It's perhaps fitting that when I eventually saw Fred Astaire and Ginger Rogers' final film together, The Barkleys of Broadway, it was separated from my viewings of their previous films by at least two years, since in a vague way that apes the ten-year gap there was between 1939's The Story of Vernon and Irene Castle and this final pairing, which occured when Judy Garland (who had already partnered Astaire in Easter Parade) had to drop out (though she apparently showed up on set repeatedly to make things difficult for Rogers). It's somehow not really a surprise that this is one of the weakest offerings from the legendary partnership- the most magical moment comes in a retread of Shall We Dance's 'They Can't Take That Away From Me', where everyone involved seems to acknowledge that Barkleys is a film clutching hopelessly to an unreachable past. There is no new ground to tread here, simply a brief reunion of faded magic.

I'm always someone who's been far more interested in actresses than actors, and even if Fred Astaire is a rather brilliant man, I'm concerned about the treatment of Ginger Rogers in these movies. The plot of The Barkleys of Broadway is, rather obviously, referencing the desire Ginger had to be a 'serious actress', which one suspects is partly what lead to the break-up of their partnership at the end of 1930s. The cycle of their movies in the 1930s sees a gradual move towards more equality in the partnership, and with that more weight, more drama in the romantic plotlines. Swing Time marked the first time their love wasn't sealed with a romantic dance- 'Waltz in Swing Time' ends with Ginger spinning off and Fred gesturing sadly after her, and the reunion is instead sealed afterwards, proving Ginger can no longer be so easily won. As the partnership wound down, The Story of Vernon and Irene Castle had them already married, already stable, already equal.

Ginger doubtful; Ginger convinced
The Barkleys of Broadway, though, undoes the good work that the previous film did in sending Astaire and Rogers off in a pleasant fashion. For whatever reason, Ginger seems all too happy to mock her former serious self, and finally to accept the idea that Astaire really is her "Svengali". She is the one who has to be dragged onto the stage for the estranged pairing's reunion dance at a charity event- and is visually convinced during said dance to 'They Can't Take That Away From Me', even if she still leaves afterward. It is still Ginger who must realise her mistake and come back to Astaire, back to musical comedy, and leave her own aspirations behind, by convincing herself that those no longer are her aspirations. She cannot even be an actress without her "Svengali"- who pretends to be her French director (Jacques Francois) in order to boost her confidence and perform well.

In essence, during The Barkleys of Broadway, Ginger comes to believe that she is nothing without Fred, that it is to him she owes her career. While it's true that her post-Fred career never really took off, despite winning the Oscar for Kitty Foyle in 1940, is it not a bit much to say that Fred could have stood without Ginger? Who can say if he would have become the star he did without Ginger as his partner? There's no question he was the better dancer, but would their films have been as good an escape from the Great Depression if Ginger hadn't been there as a tough cookie counterpart, a twirling dervish of a dress-wearer? Astaire stayed where he knew he could succeed. But Ginger tried. Trying to be a 'serious' actress isn't necessarily better than being a dancer or a comedienne, but she stretched her legs, she ventured into the unknown, she had a go. And it's a shame she's not more celebrated for it.
Posted by Dave at 2:20 pm 1 comment: