Hit Me With Your Best Shot: Beauty's In The Eyes

Before I sat down and watched Beauty and the Beast for this entry, I managed to stumble, completely by accident, on an essay that discussed how the film might function as an allegory for the AIDS crisis and how it plays with ideas of gay male types. These ideas had never occurred to me, but they make complete sense - note particularly how the screenwriters have changed the attack on the Beast to be motivated by the general threat to the townspeople and the children he might snatch, whereas the original story is a much more enclosed, personal battle between the lead characters.

But, watching the film again, this wasn't the only suggestion that Beauty and the Beast subverts the traditional, conservative ideals that are generally attributed to Disney's empire. It's very easy to dismiss the film's ending as throwing its laudable moral - love is more than skin-deep - out the window as the Beast transforms back into a handsome white prince, but this ignores not only the groundwork the film has continually laid out, but the very expressive work we can see in the scene of the transformation itself. 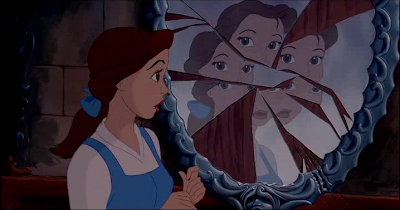 On Belle's forbidden visit to the West Wing, the film establishes the key trope of eyes. In contrast to Gaston, who is constantly being distracted by his own reflection, you sense Belle has never really looked in a mirror. Here, she does, and in the cracked glass, she's confronted with about a dozen of her eyes looking back at her. While Gaston, and indeed the rest of the town, conceive of Belle as the 'Beauty' of the title, this shot, early in her time at the castle, sidelines that idea. As the Beast learns to love, Belle learns to see the value in the reality of the world around her. Here, she seems shocked to realise that she even exists, and the multiplicity of eyes reminds her of the value of looking. 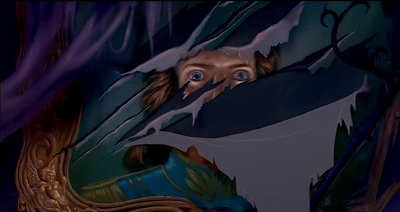 It also makes for an intriguing visual correlation with this shot, just moments later. The Beast has ripped apart his portrait, reflecting the mangling of his own beauty by destroying its painted image, but crucially, the eyes remain in-tact. Belle goes to lift the hanging scrap, but she doesn't complete it, suggesting that complete physical beauty is always an afterthought for her.

Which we see in these scenes, essentially of the Beast's 'death'. I'm not sure what it says about my state of mind that my favourite shots from Beauty and the Beast were of characters dying or crying, but it's rather apt and helpful that I really found the beauty in the beast in this shot. I don't think it's accidental - it's designed as a picturesque portraiture, Belle caressing the side of his face delicately. Moreover, it centres the eyes as the bright focal point - so much expression through drawing, a wistful love in the blue. As a frame, it's as carefully designed as the following one of Belle, looking down at him: 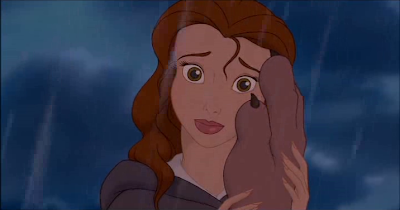 If anything, Belle, the supposed 'Beauty' who Gaston basically wanted to frame and preserve rather than love, has less of a portrait than the Beast, though the caressing hand is a poignant visual match to the previous shot. By having Belle looking straight at the 'camera', it positions this shot as a point-of-view shot, as opposed to the portrait of the previous image. But above all, once again, it's the eyes that are the key to the image - bigger pools on Belle's face than the slits on the Beast's, they seem to shine with concern. It's the character design of the entire faces that does the work for both characters, of course, but the images draw focus to the eyes, connecting the couple in what they think are their last moments together.

Finally, crucially, after the Beast has transformed back into the Prince, Belle doesn't care about the handsome new figure in front of her - she finds the answer, that he's still the same being, in his eyes. 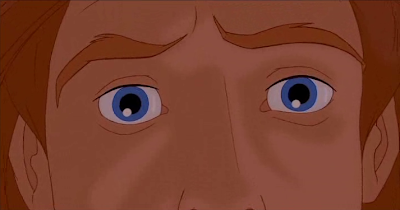 Bonus: the geometrical matching of eyes to bodies in this shot of Cogsworth and Lumiere always tickles me. 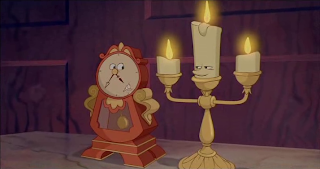 Nothing Sacred is an odd film. Although it's not particularly unusual for a pre-1940s film to be as short as this - a spry 77 minutes - there's a strong feeling that things have been cut out here, whether that's actually the case or not. It's more a satire than a screwball, and the odd moments don't feel intentionally kooky and offbeat, merely mysterious, like a character used as a plot device at the film's start suddenly reappearing to be a plot device in a completely different place. Strangely, given the script by Ben Hecht, one of Hollywood's great screenwriters, and the charismatic leads Carole Lombard and Fredric March, it takes until the final scenes to reach the expected plane of hilarity, though it's never less than watch-able thanks to the mere presence of Lombard and March, sparkling individually as ever even as their pairing seems underdeveloped. Similarly, there's some punch in the idea of the city taking in the fradulent Lombard as their dying heroine, but it never lands the blow. As it is, this all feels a little rough around the edges, but it makes for an interesting curio rather than something that might just have faded into obscurity. In particular, there's a few strikingly diffident shot choices. 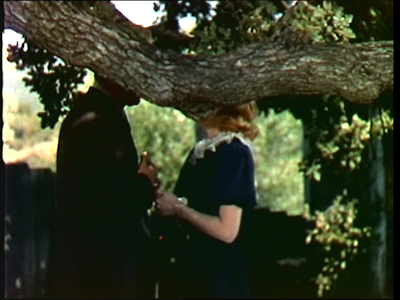 As March's Wally Cook invites Lombard's Hazel Flagg to New York, making her keep the truth about her (lack of) illness a secret, they walk under a tree and proceed to have a large part of their conversation hidden by a branch. It's so outrageously noticeable, and director William A. Wellman even emphasizes it by giving them a mere one second on the other side of the branch. 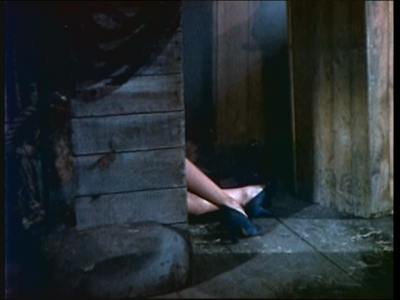 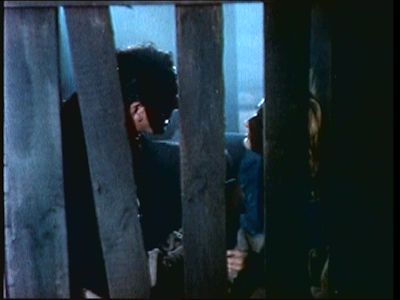 The camera then pans around the box, with the expectation that we'll land on the traditional mid-shot of the clandestine pair. Only we get there, and there are planks in our way. Their conversation, and their kisses, are still hidden in shadow. Throughout, Nothing Sacred deliberately shys away from indulging in a properly romantic plot, from the possibility of a delirious reunion kiss in the frenetic boxing climax - the scene cuts instead - to the coda, where the plot necessitates them being hidden by both costume and shadow. And even then, with the pair alone, together, in love, romance capitulates to a completely bizarre comedic ending. Is nothing sacred? 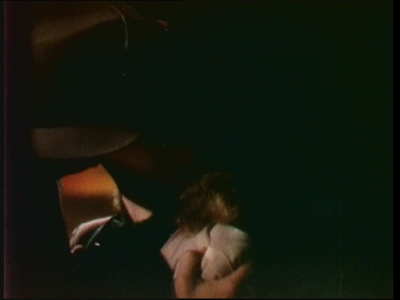 Hit Me With Your Best Shot: Cinematic Creatures

"I don't care what you do. Paul and I are going to Hollywood. They're desperately keen to sign us up. We're going to be film stars."

The girls of Heavenly Creatures lose themselves in fantasies of murder, of emigration, and of magical castles, but, particularly because this series focuses on cinematography, it's the cinematic inflection to it all that really sparked my interest.


Juliet (Kate Winslet) and Pauline's (Melanie Lynskey) deification of various male filmstars is fascinating on various levels, not least in how it plays with the film's navigation of the girls' sexual desires and fantasies. What particularly struck me about this moment, though, was the position of power within their friendship - Pauline is constantly looking with worshipping eyes at Juliet, evidently deifying her friend more than any of the stars in the photos. When Pauline finally suggests her own heterosexual desire, Juliet - seemingly unaware, and certainly uninterested, in Pauline's feelings towards her at this point - isn't just disapproving, she's horrified.

Orson is easily thrown away and quickly consumed by the waterfall. Crucially, the ease and cruelty of this action by Juliet suggests to Pauline that people who are not approved of, or who disrupt their lives, can be simply, cleanly disposed of.

Naturally, it turns out Orson isn't that easy to get rid of.


Actor Jean Guérin, as Orson Welles, is inserted into scenes from The Third Man, alongside Joseph Cotten and Trevor Howard, so that when he haunts the girls on their trip home from the theatre, the connection is easy to make. In a perverse way, folding into the domination of the girls' fantasy worlds, Welles acts as a foreshadowing of Pauline's mother - showing the girls how killing someone does not mean you can so easily escape them.

Picking up where he fell off the waterfall, Orson continues interjecting into the power Juliet holds over Pauline. Pauline's voiceover, taken directly from her real diaries, demonstrates her heterosexual desire peeking through the repression she has undertaken at Juliet's distaste, and further, assuming the cinematic realisation of fantasies are attributed to Pauline, this subordination to Juliet bleeds over here. Exhausted, delirious from the fright and thrill that Orson's chase gave them, Pauline kisses Juliet - but then she changes into Orson, and creates my favourite image of the film.